In May of 1936 two men named William Cook and John Mahon published The Comics Magazine #1. Cook and Mahon were former disgruntled employees of Wheeler-Nicholson. They were the editor and business manager of National Allied Publications. The two would go on to form a publishing company called Comics Magazine but the title changed and so did the ownership. Eventually it would be called Centaur Comics. The Comics Magazine #1 would feature many of the same artists that were in Wheeler-Nicholson’s books. Among them was Siegel and Shuster, the two that would go on to create Superman. They renamed Dr. Occult to Mr. Mystic and actually gave him supernatural powers, but no flashy costume. The character would later appear in DC Comics More Fun #14, with the story (called "The Koth and the Seven") continuing on from one publishers book to the next. Another Siegel and Shuster character to appear in this title was Federal Agent, later renamed Federal Men when they also appeared in DC Comics. The Comics Magazine would change it's name to Funny Pages with issue #6. The title would last until 1940 ending with issue #42.

Comics Magazine #1 is in the public domain and you can download and read it by clicking here. (56.3 MB - Scanned Microfiche)

Comics Magazine would also be the first publisher to do comic books based on specific genres. They were Detective Picture Stories, Western Picture Stories, and Funny Picture Stories. Despite the title, Funny was about Adventure type stories. Detective Picture Stories would last 5 issues and they would include some work by creators who later become famous like Will Eisner and Bob Kane. The title may have continued on with another name but the specifics are not known. Funny Picture Stories did better, but they kept ending and restarting the series. There were 3 volumes, the 1st went 9 issues, the 2nd went 11 issues and the 3rd would go 3 issues before the title gets renamed to Comic Pages from #4 and up. This series also had work from people who later become famous, among them Charles Biro and Bob Wood best known for the Crime Does Not Pay comic and Fred Guardineer who did a lot of work for DC Comics. Lastly, Western Picture Stories lasted 4 issues. All with Will Eisner work in them.


Detective Picture Stories #1 is in the public domain and you can download and read it by clicking here. (26 MB - Scanned Microfiche)

Harry "A" Chesler comic factory only had two clients. Those were National Allied Publications and The Comics Magazine company. He then decided to become a publisher himself. He put out two comics with the cover date of February 1937. They were Star Comics and Star Ranger. Other comic factories like this would also decide to become comic publishers in the future. Chesler would sell these titles to another publisher but would go back into publishing in 1941.

Behind the Scenes - What’s with the "A" ?
Harry would tell people the "A" in his name stood for Anything! Whenever he tried to sell publishers on using his comic shop for creating books, he would constantly tell them he could do "Anything." 20 books or 1 story? Westerns or Science Fiction? How many pages? When do you need them by? His shop could do "Anything!"

By mid 1937, the Comics Magazine Company would be sold to Ultem Publications. Ultem was a duo named Irving Ullman and Frank Temerson, the latter was a former city attorney for Birmingham, Alabama. They were suspected Mob men who ran a number of businesses to launder the Mob's money. They would often use phony addresses and switch their companies names frequently to confuse the authorities. They would also buy the Star Comics line from Harry "A" Chelser and add it to their line. A year later this company would be sold again to Centaur Publications which was owned by Joseph Hardie and Fred Gardner. Centaur would go under in 1942 due to bad distribution. Ullman and Temerson would continue in the comics business through a variety of company names. They owned a low grade printing press in Holyoke, Massachusetts which allowed them to continue on printing comics through it all. Their editor was artist L. B. Cole who drew a number of imaginative covers for their comics that collectors still seek out today.

From here a slew of books devoted to reprinting comic strips came out, among them:

With so many books out reprinting comic strips, they eventually ran out of comic strips to reprint! Original material began to take over.

Some of the original material came from within. Sheldon Mayer, the teenage editor and comic enthusiast got his creation called Scribbly into comic books. He first appeared in The Funnies #2 and would later move over to All American Comics.

In 1937 another major comic "shop" started, this one called the Iger-Eisner Shop. The owners were Jerry Iger and Will Eisner, both of them were cartoonists but Iger became the salesman of the duo. The two had met while working on Wow, What a Magazine. Iger was the editor and Eisner did some work for them. After it went out of business both were looking for steady employment. Eisner came up with the idea of starting a comic shop, pitched the idea to Iger as he was a good, pushy salesman. Eisner supplied the start up money ($15 from a recent advertising art job) and did all the artwork. Iger's role besides being a salesman was to letter the comics. Once they began getting work they created another company called the Universal Phoenix Syndicate, which worked like a newspaper syndicate selling comics for local and international publications. They would soon be making comic books. Will Eisner was the shop initially, doing artwork in different styles and using different names.

Eventually they got enough work to hire other artists to work for them. Among the crew would be Jack Kirby, Bob Kane, Lou Fine, Dick Briefer, Mort Meskin, Reed Crandall, Nick Cardy and Bob Powell. They made comics like a factory made cars. Eisner would start the pages in non-photo blue pencil. He’d break down the action, do the layouts, sketch the figures and indicate dialogue. Then a writer would do the captions and finish the dialogue. The pages then went to the artists, the first would finish the main figures and ink them. The second artist would do the background and ink them. After the art was done they’d be lettered and cleaned up (mistakes erased). Eisner would check everything at all levels and would either have artists make changes or do them himself. Eisner would also have a strong hand in the first couple of stories for new characters to get them off on the right foot, he would then let the staff artists take over. It should be said in all the comic "shops" that the artists in them were either A) Beginners straight out of school (or in some cases still in them) or B) Experienced artists who had comic strip work but were now unable to support themselves in that field.

Major Malcolm Wheeler-Nicholson was in deep debt with printers and his distributors (if not other people as well). Neither his More Fun or New Fun Comics were selling. Harry Donenfeld owned both his distributor (Independent News Company) and the printers that did the covers for Wheeler-Nicholson’s comics. He was in debt with Donenfeld for both companies. When Wheeler-Nicholson tried to get more money for a new comic, Donenfeld and his accountant Jack Liebowitz became partners of the company. They published the already advertised Detective Comics #1 in March of 1937. The editor and artist for this cover would be Vincent Sullivan. Inside the book would be a bunch of racist stories using Chinese villains. This comic would eventually become the name of the company. This title would do very well for the company due to a particular character that appears in the near future. 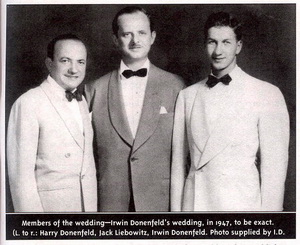 By 1938, Donenfeld would write off Wheeler's debts for his half of the company to become the sole owner of National Allied Publications. He then took on a friend/accountant in his distribution business, Jack Liebowitz as a partner. The company was renamed National Periodical Publications. Liebowitz stayed at the offices and headed the accounting and creative part of DC while Donenfeld handled and expanded the distribution though his company Independent News Co.. Also involved is Paul Sampliner who's family helped finance Independent News. Donenfeld remained president of DC until his death in 1965. Liebowitz remained in DC until 1970. When DC was bought by Warner Brothers he moved to the Board of Directors of that company. He died in 2000. Detective Comics is the company’s longest running comic book title. This is due to another character who took over the title some time later.

Behind the Scenes - The Odd Couple.
Harry Donenfeld and Jack Liebowitz have interesting histories themselves. Harry came from a family that was involved in the printing business. During the prohibition period he tried to make a go of it in the garment industry but didn't do so well. Along the way he drank and gambled and had a very charismatic personality. He got to know the mob men behind the booze and gambling. After he went to work for his family's printing industry, he used his connections to print soft core porn books (among other magazines) that was distributed through mob channels. He was likely using some of the Canadian timber the mob had imported as cover for the booze. From there he went into publishing.
Jack Liebowitz was an accountant for a garment industry Union that his father belonged to. He would leave the union after the mob got directly involved in running it. Jack would end up working for Harry in the printing industry. The two had skills the other lacked. Harry was the people person who liked to wheel and deal and people wanted to work with him. Jack was the stable money manager that kept the business running smoothly and got Harry out of trouble when he made bad deals. Jack would end up taking over DC Comics/Independent News and the licensing arm of the company and turning it into a fully legit, respectable corporation.